A yellowhead jawfish peeks out of its burrow in a home aquarium. (Image Credit: Robert Harman)

What a cutie. And a doting father.

I recall seeing this dainty, snow-white fish while scuba diving in Key Largo, Florida. In a shallow, 15-foot (4.5 m) deep coral reef bathed in sunlight, a powdery-yellow head like the one in the photo above peeked out of a sandy burrow.

After I settled down on the seafloor and stopped moving, the jawfish would slink out of its burrow and resuming its vertical pose, hovering just above its “doorstep”, revealing the rest of its petite body, just shy of 4 inches (10 cm). 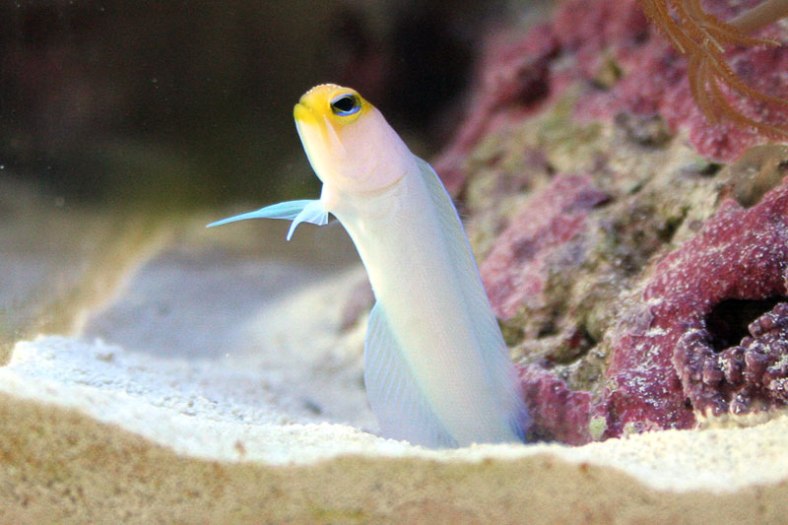 Jawfish have slender bodies that let them slink in and out of their burrows. (Image Credit: Unknown)

Jawfish are named for their humorously large mouths, which serve several important functions.

For catching food, of course — little bits of food and small swimming creatures that float by its burrow. And for digging burrows — taking big mouthfuls of sand and spitting them out as they create their hideaways.

This is helpful when large predators try to flush them out of their burrows. Nassau groupers (Ephinephelus striatus) have been observed to fan their tails to cover jawfish burrows with sand, in hopes of forcing the jawfish to burrow back out and show their heads… and get eaten. But the jawfish seem to be able to play the waiting game, and can wait up to 10 hours before attempting to reopen their burrows (Colin 1971).

But jawfish are also mouthbrooders, meaning a parent fish will use their mouth to hold eggs until they hatch. Yellowhead jawfish are known to be monogamous, with pairs digging adjacent burrows and sometimes sharing or switching burrows (Hess 1993). Males are the responsible brooder, and will hold a clutch of eggs in their mouth for 5 to 7 days (Hess 1993) — all the while looking like a chump with a mouth full of sticky marbles.

You can see an amazing photo of jawfish mouthbrooding behavior at this Flickr link, or watch these videos:

Yellowhead jawfish are found in the shallow seas of Florida, the Caribbean and elsewhere in the western central Atlantic Ocean, and are often seen in the aquarium trade.