Searching on Google is like following Alice down the rabbit hole — you never know where you are going to end up.

All I intended was to do a bit of literature search on this delicious little fish, the Pacific Saury (Cololabis saira) — and I end up finding this video:

Apparently this is the track you need to play when you want to chill with the saury.

Groovy. But there you go. Live saury in action.

Pacific saury are harvested as food fish in the western Pacific Ocean, with Japan as the major market, and as bait fish elsewhere in the Pacific.

I became familiar with saury through Japanese cuisine in Taiwan, where this roughly foot-long (30 cm) fish is often served whole and grilled. In Chinese and Japanese, the saury is written as 秋刀魚 — the “autumn knife fish”. “Knife” refers to its blade-shaped body, while “autumn” refers to its harvesting season in Japanese waters from August through December (Huang et al. 2007).

A touch of lime juice really brings out the flavor of this fish, which has a very oily and dense flesh with a decidedly fishy taste. Those who enjoy grilled mackerel will find saury’s texture, taste and smell akin to a miniaturized mackerel — although saury are not related to mackerel and only look superficially similar.

Those do not enjoy mackerel or fish in general may wish to avoid saury… or indoor spaces where saury is being cooked. That said, saury should really be cooked on a charcoal grill outdoors:

I have not had the chance to try saury, or sanma, as sashimi, although a friend who lived in Japan reports raw sanma as tasting just fine. If so, I might consult this video someday: 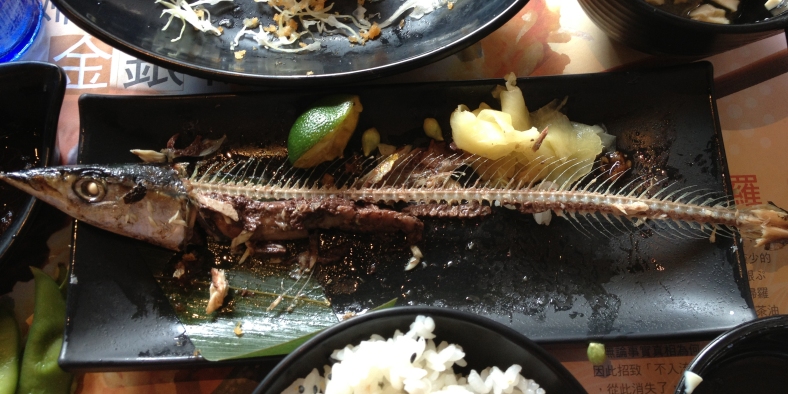