Why get to know a fish? It could be a matter of life and death.

Especially if you’re James Bond, and you are about to get quizzed by a super villain on your knowledge of fish species.

In the film The Spy Who Loved Me, James Bond poses as a marine biologist (“Sterling… Robert Sterling.”) to uncover the secrets of Karl Stromberg, who has been stealing nuclear submarines as part of his Plan for Total World Domination.

Bond travels to Stromberg’s underwater lair (repeat that to yourself in the Dr. Evil voice…), but his attempt to impress backfires immediately, and we get our overly dramatic stare-down contest — a requisite of any Bond film:

Bond:  “An extraordinary number of rare species.”
Stromberg (stone-faced):  “You recognize that variety of course.”

A red lionfish (Pterois volitans) featured in the film The Spy Who Loved Me. (Image Credit: MGM/Danjaq, LLC)

Bond (after a brief pause):  “Of course… Pterois volitans. Other fish avoid it. Those dorsal spines are laden with venom. Handsome but deadly.”
Stromberg:  “I see you know your subject, Mr. Sterling.”
Bond:  “One tries.”

James Bond (Roger Moore) poses as a marine biologist in the film The Spy Who Loved Me. (Image Credit: MGM/Danjaq, LLC)

Bond answered correctly, of course. It is indeed Pterois volitans, the red lionfish.

However, it is not at all a rare species — in fact it’s quite laughable that Stromberg quizzed Bond on a fish that has been long sought after in the aquarium fish trade. It’s like trying to stump a car mechanic by pointing to a Mercedes. Villainy fail.

Of course, nowadays it is the lionfish that is the villain on a path to world domination.

Unfortunately, these same qualities have allowed Pterois volitans to become one of the most invasive, non-native species in the western Atlantic Ocean in recent decades.

The first individuals were likely released into the ocean by unscrupulous aquarium owners in Florida who got tired of their lionfish, which tend to eat their fellow tankmates and quickly outgrow small tanks. Relatively unchallenged by native predators, lionfish populations have exploded in the Atlantic, where they are now found as far north as New York and Rhode Island, the Bahamas and Bermuda to the east, and Venezuela and Barbados to the south.

The torrential march and ecological damage of the lionfish has been well documented in news articles and websites, so rather than repeat the story, I will direct you to a few links for reference:

The lionfish may well be here to stay, but there is at least one way to put some pressure on their numbers — with a fork. 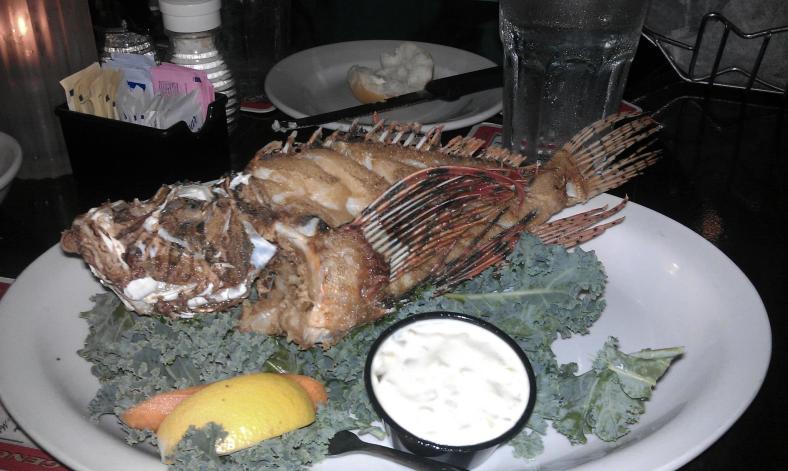 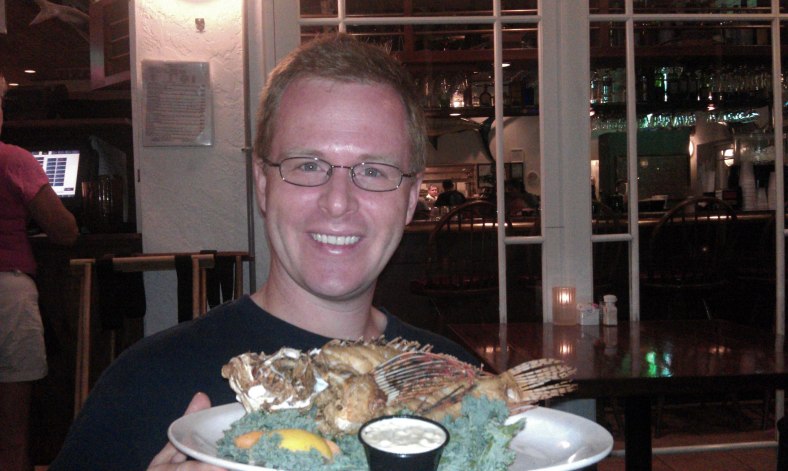 One set of fighting words against the lionfish invasion has been this: “If we can’t beat them, let’s eat them!”

And so did my old friend and dive buddy Dr. Mike Scherer. Hearing of my planned blogpost on lionfish, Scherer sent over the above photos.

“Recently in the Florida Keys, they started offering lionfish as a very inexpensive dinner plate — about five dollars — to help reduce the population,” says Scherer. “It’s a little bony, but quite tasty!”

You can read more in the following links about the movement to put lionfish on the American menu:

Well, as you can see we’re just full of links today. I’m not quite sure how we’ll fit in Christie Wilcox’s blogpost on how the television show New Girl horribly botched up lionfish science, or talk about how lionfish apparently will survive well into the 24th century, at least in Captain Jean-Luc Picard’s fish tank on the starship Enterprise…

But seeing as we’ve been on a cinematic theme all day, let us simply close with another classic lionfish scene. This one is from the Leslie Nielsen comedy The Naked Gun, with yet another villain who doesn’t know his fish — this time it’s  Ricardo Montalbán talking about his “Japanese fighting fish”: 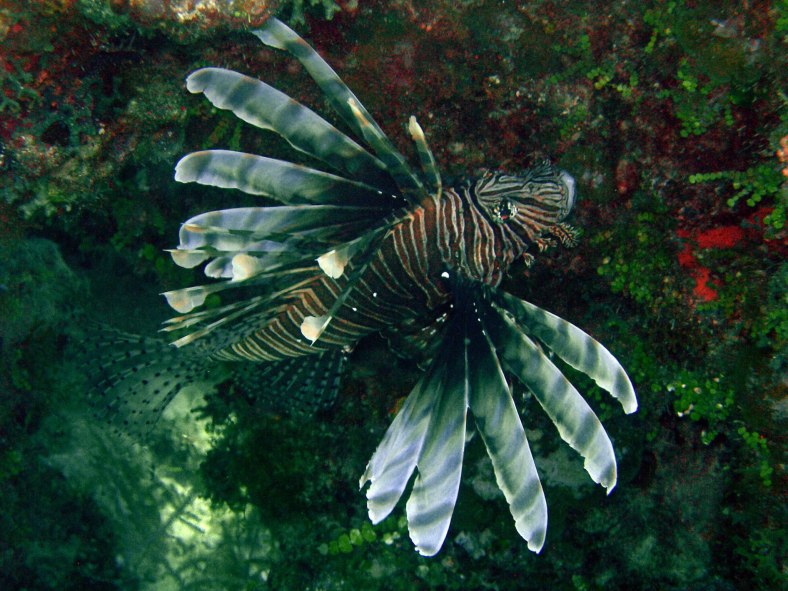 Addendum July 4, 2013: Marine biologist Christie Wilcox wrote an extensive feature article on the lionfish invasion, the inaugural North Carolina lionfish derby, and the obesity of nonnative lionfish in a new article for Slate.com.

Many thanks to the following for suggesting links and resources for this story: Kevin Zelnio, Christie Wilcox, Roger Harris, Richard Ehrenkaufer, Joanna Chin, Leslie Gordon, Jen Weaver and Mike Scherer.