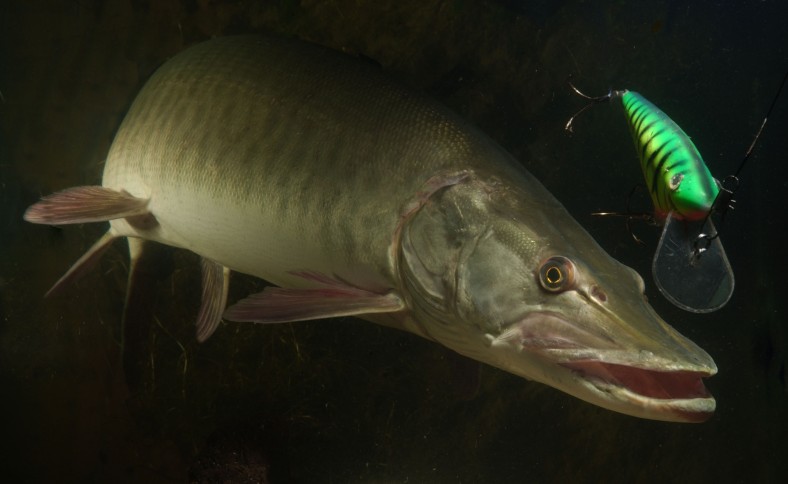 Who says big fish with scary teeth are only found in oceans?

I give you the muskellunge (Esox masquinongy) — a fearsome predator of lakes, large rivers and slow-moving streams of the eastern United States and Canada.

As you can see, the muskellunge is all teeth. And is not small. 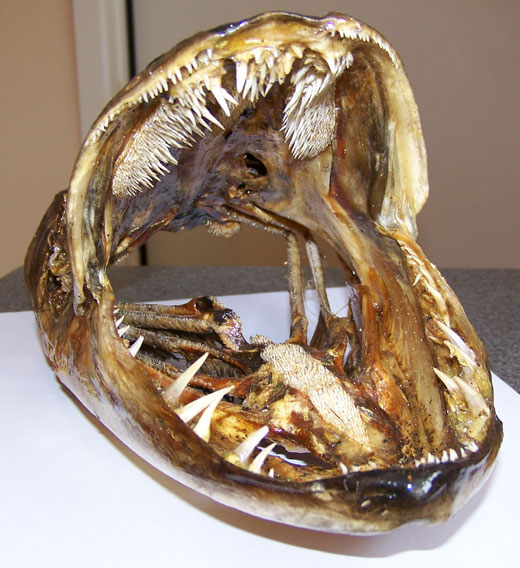 The toothy jaws and palate of a muskellunge (Esox musquinongy). (Image Credit: Unknown; sourced from http://www.muskiescanada.ca)

As can be seen in the facial expression of this angler, the muskellunge or “muskie” has a fabled status among freshwater gamefish, called “the fish of a thousand casts” by some for its elusiveness. It lurks among dense aquatic vegetation, preying on fish and even ducklings and muskrats. And with known records of muskies reaching 1.83 meters (6 feet) and up to 31.8 kilograms (70 pounds), I can only imagine the adrenaline that comes with hooking and successfully landing one of these giants, which are the largest species of the pike family, Esocidae.

Indeed, vast resources and fanatic dedication are placed in the pursuit of this fish — as well as towards its propagation.

I was reminded of the muskie by this recent news story in the Star Tribune newspaper of Minnesota. It profiles the painstaking work undertaken by the Minnesota Department of Natural Resources each year in its muskellunge breeding and stocking program.

Last week, state fisheries specialists were working in cold waters 52 degrees Fahrenheit (11 Celsius), trapping 60 to 75 adult muskellunge and harvesting their egg and sperm. About 900,000 eggs were artificially fertilized, in hopes that a crop of about 30,000 baby muskies will be successfully hatched, reared, then released into their native habitat — helping to maintain healthy populations of muskellunge in the wild, while satisfying the demand of eager sportsfishers seeking the catch of his or her lifetime.

See the full article and photo gallery at the Star Tribune to learn more.

Then, get an even more intimate picture of the muskellunge breeding and stocking effort by watching this fascinating Kentucky Afield documentary from the Kentucky Department of Fish and Wildlife Resources, which shows the humble beginnings of the great muskellunge from tiny eggs to pencil-thin fry — and the reverence and awe that the muskie inspires in anglers young and old.

Addendum: After reading the post, friend and marine mammal specialist Robyn Walker relayed this fun tidbit about her encounters with muskies while working at Carleton University under Dr. Steven Cooke, on a project with Parks Canada and the City of Ottawa:

“My undergrad thesis involved swimming in a murky canal system with a bunch of these guys in Dow’s Lake (part of the Rideau Canal system) in Ottawa, Ontario. They are even more terrifying when you unintentionally end up nose-to-nose with one. They’re huge! Not gonna lie, there was a lot of snorkel-screaming that summer.”

Mind you, Robyn stands at about five-foot-three. The muskies would be almost as big as she was.

Having had my own “oh hai” moments with four-foot barracudas while diving, when you turn your head and suddenly see a mouth full of teeth in your face and big eyeballs looking back at you curiously — I can wholly identify with Robyn’s snorkel-screaming….

Esox masquinongy Mitchill, 1824
Muskellunge (click for names in other languages)