This opalescent little beauty is a pinfish (Lagodon rhomboides), and I spotted the photo on my friend Suzanne’s Facebook page. Our exchange went something like this:

Me: “They’re called pinfish because their dorsal fins have really sharp spines that can poke your hand.”
Suzanne: “Oh, wow — now you tell me!! Ha — I experienced that first-hand. Too funny. They’re beautiful, though.”

While Suzanne hooked this pinfish off of a North Carolina marina, many other anglers along the eastern United States coastline and Gulf of Mexico have likely experienced the sharp sting of this innocuous-looking baitfish. 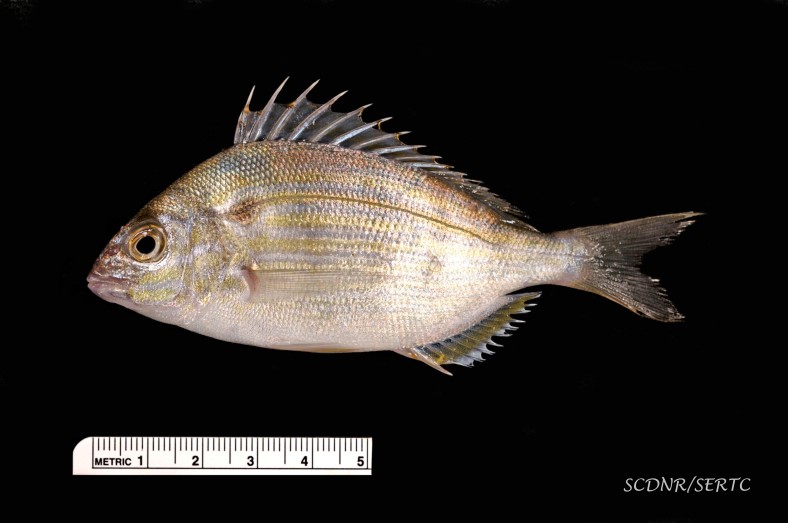 And baitfish they are. Pinfish average about 7 inches (18 cm) in length, and are popularly used as live bait to catch the gamut of prized sportfish in the southeastern U.S. — tarpon, grouper, snook, barracuda and so on.

It would seem that their sharp dorsal spines offer only so much protection.

The gorgeous yellows, greens and blues of pinfish blend well into thickets of seagrass — when snorkeling, you’ll need sharp eyes to look for dark eyeballs peering back at you in a seabed of dull green. One study documented how pinfish grew faster in seagrass beds earlier in their growing season — where the flowing grass blades offer a maze of habitat for protection and food foraging — before growing big enough to venture out onto sandy seafloors (Harter and Heck 2006).

The pinfish is a type of porgy — frequent readers will recall that members of Family Sparidae, like the dorade royale, are oftened endowed with multitudes of odd teeth shaped like human incisors and molars.

The pinfish itself is equipped with some chomping incisors — a trait recognized by its genus name, Lagodon, which is Greek for “rabbit teeth”. 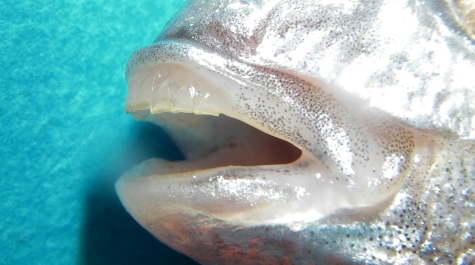 The incisors of Lagodon rhomboides, the pinfish. (Image Credit: Virginia Institute of Marine Science/The College of William and Mary)

I have one fond pinfish story: As a kid, I once scooped up a tiny, silvery sliver of a fish off a marina dock, and took it home and dumped it in my saltwater aquarium — which was used to serving as a transient motel for random species similarly netted.

Days would go by and I would only catch fleeting glimpses of the fish, maybe an inch long and lacking any distinguishing features. It was silver, had fins and eyeballs, and I had no idea what was darting in and out of the water pump current to catch little bits of fish food.

Later that summer I was away from home for several weeks, leaving only a timed food dispenser attached to the tank (I plead guilty to being an irresponsible teenager).

I returned to find a big surprise — darting between the rocks was a 3 inch-long, pearly oval shape, bigger than anything I knew was supposed to be in the tank. It took a few moments before I connected the dots.

My minute minnow had grown up into a pinfish.

Pinfish (Lagodon rhomboides) larvae are one example of how fish shapes and colors can drastically change as they grow and mature. (Image Credit: Wendy Allen/Baruch Marine Laboratory)

Lagodon rhomboides (Linnaeus, 1766)
Pinfish (click for names in other languages)

Special thanks to Mollie Reynolds and the Southeastern Regional Taxonomic Center (SERTC) at the South Carolina Department of Natural Resources for permission to use their pinfish photo. And of course to Suzanne Smith for her fishing photo.