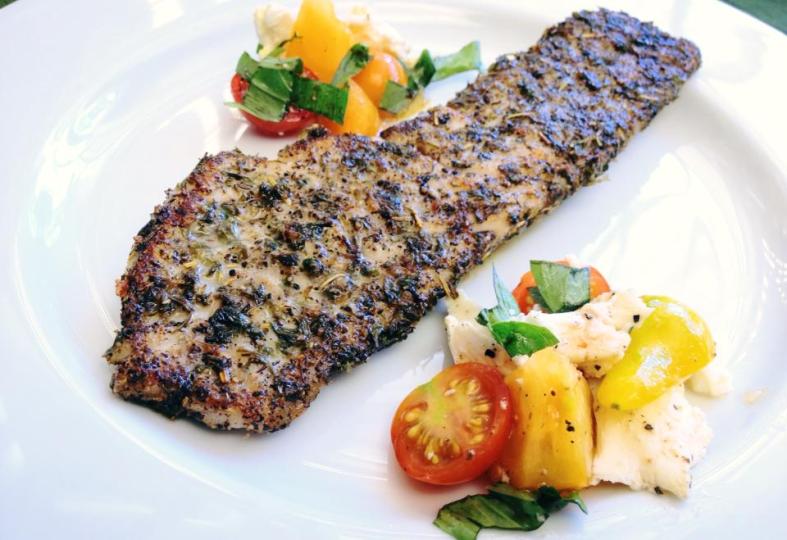 When a great meal comes together, it brings a smile to my face. I was very happy with how this blackened rockfish fillet turned out — crusted with dried fines herbes and freshly ground black pepper, served with a tomato, basil, mozzarella and balsamic vinaigrette salad. With a glass of Lillet blanc, it was a delightful way to spend a summer afternoon.

But I would have been even more delighted if I could have learned the true identity of my rockfish.

The trouble with fish sold in most U.S. supermarkets is that they are often anonymous. Stripped of their skin, fins and head, there is nothing identifiable about each slab of meat. 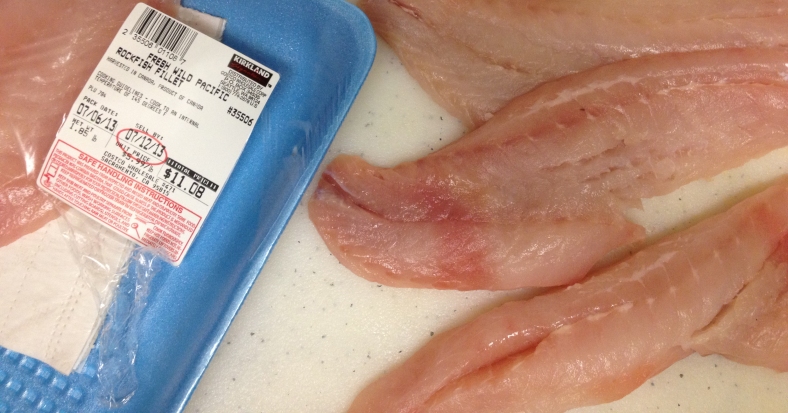 For as far removed as most U.S. shoppers are to traditional butchers and farm operations, at least most people can point out what a chicken or steer or turkey looks like. But the same isn’t true for fish. In this particular package of fish fillets, all I have to go on are “Pacific rockfish” and “harvested in Canada” — and this stray scale. 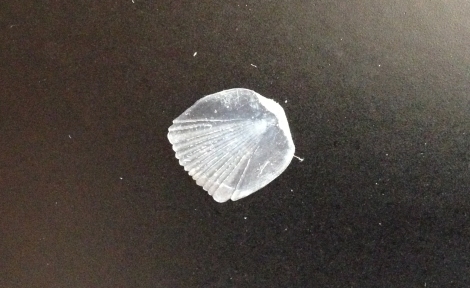 This anonymity is especially complicated when rockfish are involved.

Typically, when I’m faced with an unfamiliar fish, there is at least a name or some clue that helps me dig deeper at its identity. But look up “Canadian rockfish” and you’ll find that there are at least 34 species of rockfish in the seas of British Columbia.

And as you can see from the below poster, these rockfish are a splendidly colored and diverse bunch. 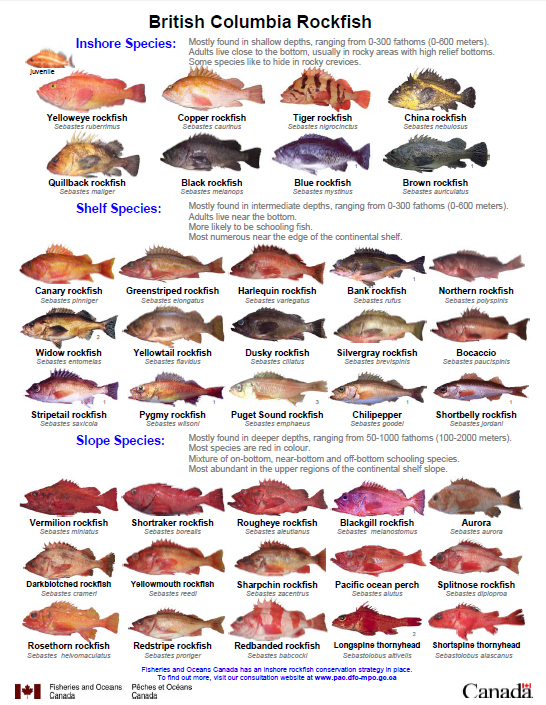 With what few clues and resources available to me — and to most casual enthusiasts — my investigation meets a dead end. We are left only with a handful of Sebastes.

Most rockfishes indeed belong to the genus Sebastes, which in turn belongs to Order Scorpaeniformes — the scorpionfishes. This makes rockfishes the relatives of the red lionfish, and like the lionfish and other scorpionfishes, Sebastes species have venom glands in their fin spines.

But if there is one bit of rockfish trivia you take away today, it should be how old Sebastes species can grow.

Sebastes species are known to be incredibly long-lived. The Sebastes species with the longest estimated lifespans are the shortraker rockfish (Sebastes borealis) at 157 years and the rougheye rockfish (Sebastes aleutianus) at 205 years (Cailliet et al. 2001). The four species we named off earlier have estimated maximum ages of 100, 64, 60 and 82, respectively (Cailliet et al. 2001) — so it is possible that the rockfish I had eaten was equal to or much older than myself in age.

That is a humbling thought. 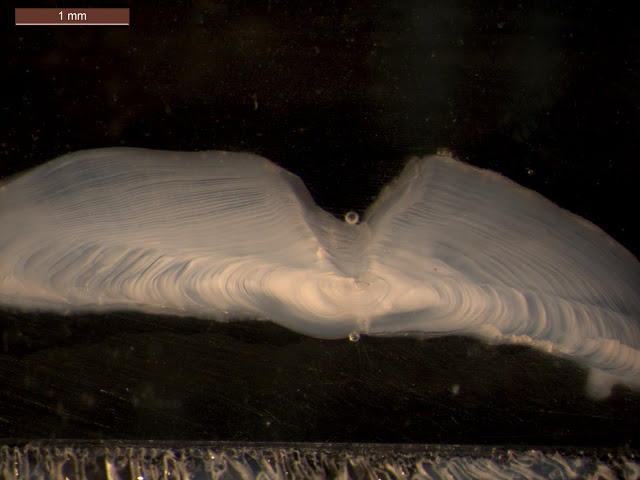 The earbone or “otolith” of a black rockfish (Sebastes melanops) bears rings that correspond with its age, and scientists often prepare otoliths for microscope examination in order to determine fish age. This rockfish is estimated to be more than 40 years old. (Image Credit: Vanessa von Biela/USGS)

What one makes of this fact is ultimately according to one’s individual perspective on nature. At the least, it is reflective to know that some fish — typically thought of as these ever-replenishing, disposable resources — have lifetimes on the same scale as human beings. That our human world goes on, decade after decade, with its changes in history and culture, from political upheavals to the wax and wane of fashions and arts — and all the while, schools upon schools of rockfishes swim the Pacific depths, living their lifetimes alongside ours, somehow making their way year after year, eating, sleeping, reproducing.

And on any given day, some rockfish is also meeting its fate in the jaws of a shark or a seal. Or, perhaps, under the blade of a fillet knife — and eventually in the snug, chilled embrace of supermarket cling wrap. 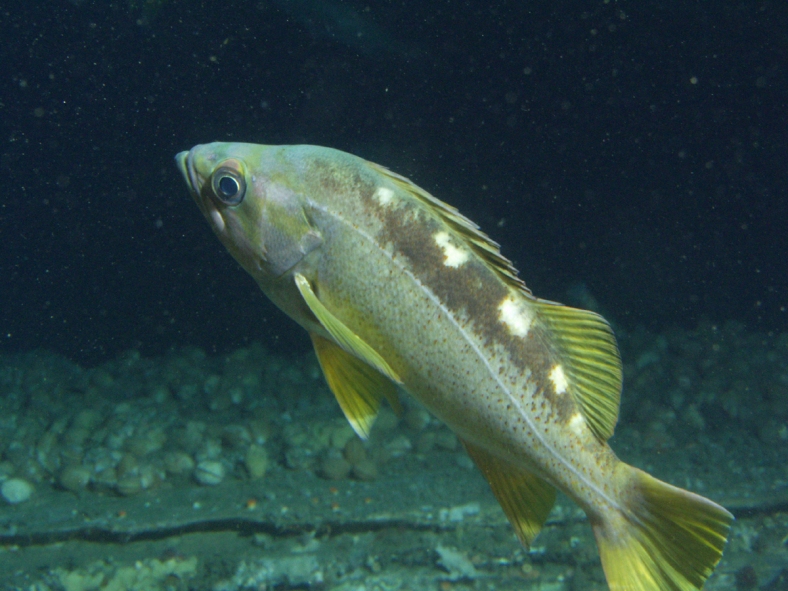 A yellowtail rockfish (Sebastes flavidus), one of the top commercial rockfish species from British Columbia, and a possible identity for our anonymous fillet. (Image Credit: Jean DeMarignac/NOAA SIMoN)

Author’s Note: Throughout this website, I have endeavored to profile individual fish species. For the purposes of this essay — and for the reasons explained — we are left without a species-level identification.

So our customary taxonomic blurb below describes the genus only. French naturalist George Cuvier was the first to describe a rockfish by the name Sebastes, which means “venerable” in Greek (the human name “Sebastian” comes from the same word).

The “spp.” used in the title of this post is a scholarly abbreviation used to denote “multiple species”, as in I am referring to all the species that belong to the genus Sebastes, and not one particular species. The abbreviation is not italicized, as in Sebastes spp. or Danio spp.