Rest in peace, Pablow the Blowfish.

Unbeknownst to me and probably also to you, Miley Cyrus is an aquarist. Followers of the American singer’s Instagram were reminded of her piscine pets in February 2015 when she posted this photo:

And so, it was goodbye for Pablow, gone to fish heaven. But Pablow was deserving of a more soulful elegy than just a few achy-breaky-heart emojis—which Cyrus finally provided months later. Cyrus wrote on her Facebook page on May 18 to introduce the song, which debuted during one of her Happy Hippie Foundation performances:

Some of you may remember a few months ago my dear blow fish Pablow past away. I wrote this song for him…He made me so happy and I miss him everyday….

After her cries of sorrow for Pablow, Cyrus croons a dilemma shared by some fish enthusiasts:

Her wishes for her fish did verge on the biologically impossible, however:

From the Instagram photo, Pablow looks to be a balloonfish (Diodon holocanthus), a species found in tropical and subtropical seas around the world. Pablow is indeed, a type of blowfish or pufferfish—belonging to a very specialized group known as Diodontidae, the burrfishes or porcupinefishes.

Members of this fish family are covered in sharp spines. Some species have short spines that always stick out like thorns on a rose stem or the burred edges of an agave leaf, while other species have longer, bonier spines that lay flat when the pufferfish is relaxed, but stand up and stick out when its body is inflated. The balloonfish is in this latter group.

The other trait of porcupinefishes that people—and presumably Miley—often find endearing is their seemingly smiling expressions.

Balloonfish in particular have these big, curious, aquamarine eyes that seem to go on forever if you stare into them—it’s not hard to see how Miley fell in love with those baby blues and that soft smile…

And it’s that soft smile that gives these fish their technical name.

All pufferfish have fused, rodent-like teeth, which they use to crunch and break up shellfish and other hard-bodied prey (and nip at annoying human fingers). 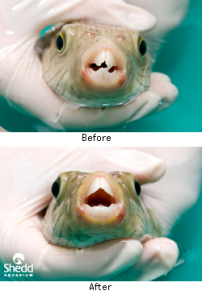 A pufferfish before and after a dental procedure by veterinarians at the Shedd Aquarium to trim its overgrown teeth. (Image Credit: Shedd Aquarium)

In fact, like rodents, pufferfish kept in captivity can suffer from overgrown teeth, if they are not fed enough hard-shelled foods to wear their teeth down. This can result in some dental work for these buck-toothed faces—you can read one example from the Shedd Aquarium in Chicago.

The majority of puffers have four teeth—a pair each in the upper and lower jaw. Appropriately, this group of pufferfishes is named Tetraodontidae—meaning “four teeth” in Greek.

But in the ballonfish and other porcupinefishes, those four teeth are further fused, becoming one single tooth each in their upper and lower jaw—and leaving these puffers with a permanent, perfectly even smile.

Alas, poor, Pablow. We hardly knew ye. But thanks for being a great celebrity pet, and for giving us all a chance to talk pufferfish biology.

We’ll miss you, too. 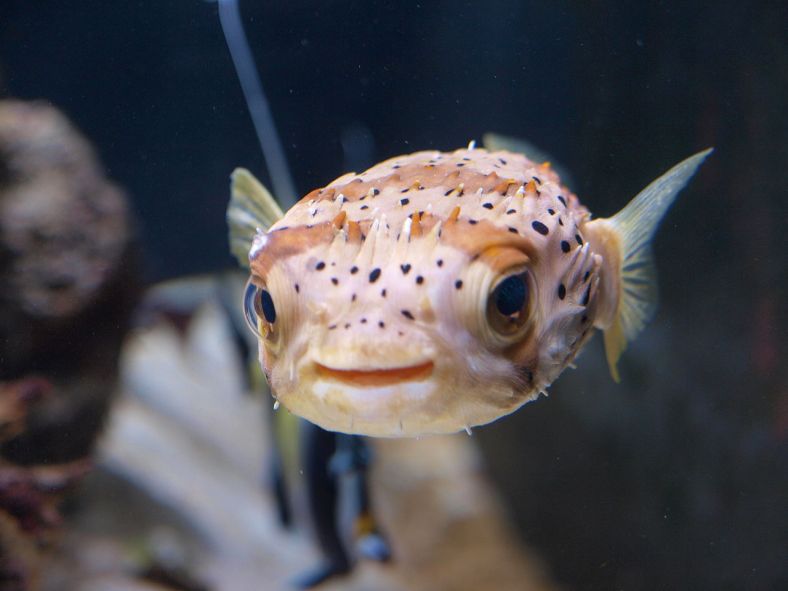